Lex Joon Racing signed an agreement for a corporation with Country Music
Entertainer Levi Riggs.
Amsterdam’s Flying Dutchman Lex Joon continues fulfilling his American Dream while
he will participate for the upcoming US Nationals in Indianapolis with his Top Fuel
dragster.

Brownsburg, IN (08-26-2022) – “Lex Joon Racing is proud to announce a corporation
between Country Music Entertainer Levi Riggs for the upcoming NHRA Dodge Power
Brokers US Nationals. Riggs who has multiple Music Row and Billboard indicator Top
40s Singles will perform during the start of the US Nationals race day singing our
National Anthem. 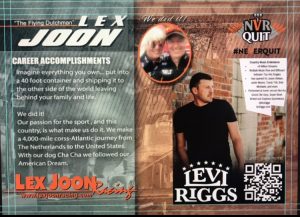 Team owner/driver, Lex Joon said he is looking forward to have Levi in the Lex Joon
Racing pits Monday morning where both of them will be signing Hero cards.
Joon is looking forward to be part of one of the bigger Top Fuel fields in recent history,
25 Top Fuel drivers will attempt to qualify for a 16 car field for Monday’s Race day.
Joon could add a new chapter to racing history by becoming the first FIA Champion to
capture a win at the US Nationals, the most iconic race in the world.

About Lex Joon Racing
Growing up in Netherland’s capital city of Amsterdam, Lex Joon created successful
automotive service companies to fund his passion for speed. Lex Joon Racing (LJR –
Europe) was established in 1995 with wife Gerda, an award winning equestrian and
racing event organizer. Together they captured the FIA 2005 Drag Racing Championship
and earned “Europe’s Most Successful Top Fuel Racer” title between 2005 and 2009.
The Joons moved to the US to achieve their ultimate goals – becoming American citizens
and winning a NHRA Championship. They now have a laser focus on fulfilling the
second half of their American dream after earning green card citizenship. Today, Lex and
Gerda are fan favorites with their underdog “Never Quit” spirit and Cha-Cha, the team’s
spirited Canine Captain. An independent Top Fuel drag racing team with the only active
female Top Fuel co-crew chief. 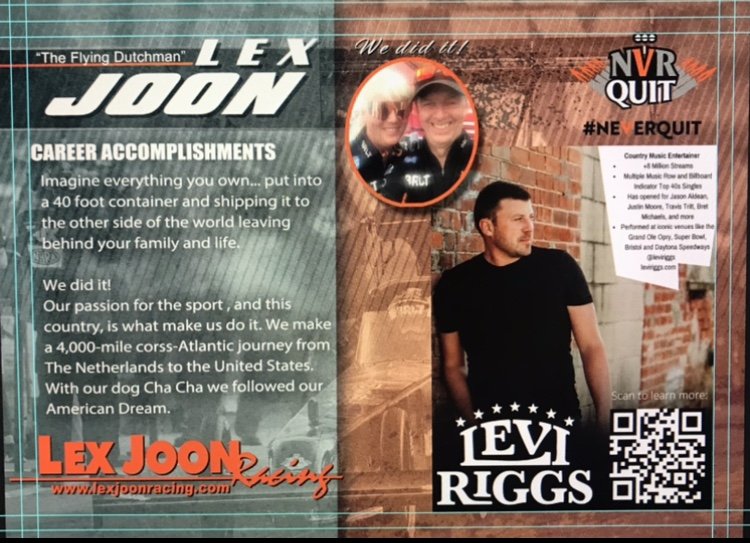