Brownsburg, IN. (October 27, 2021) – According to published reports, women who succeed in male-dominated careers are often seen negatively. Gerda Joon is an example of a woman who is determined, capable and willing to step into the traditionally male dominated role of co-crew chief on a top fuel dragster. She has already proven her worth by absorbing all the data possible and learning about the complexities involved with setting the right tune-up for various track conditions.

Lex knows it takes a strong team to win races and championships, a strong co-crew chief he found in his wife and long-time partner Gerda.

“I’m thrilled to announce Gerda Joon as a co-crew chief for Lex Joon Racing. I have worked with Gerda for many years setting records, winning races and a FIA Championship. I have seen her move up from an entry level crew member to one of the few current female co-crew chiefs in NHRA drag-racing. Over the last two years she went out of her way to help me and our part-time crew to climb the ladder building a team that’s ready to be a force when real funding becomes available.

Lex and Gerda made the decision to leave their home and family in the Netherlands to move across the globe to the United States in pursuit of their American Dream. That was in 2013; they have been working as a team ever since to achieve that dream. You won’t find Gerda at the nail shop or beauty parlor on a lazy Saturday afternoon. Instead, she’ll be at the shop working side by side with Lex as they delve deeper into the mechanics of their top fuel dragster.

Lex, who has over 30 years of experience as a team owner and driver, knows that team chemistry is a key element to success. “The most experienced teams don’t always win; you need to find the right group of people that support each other. 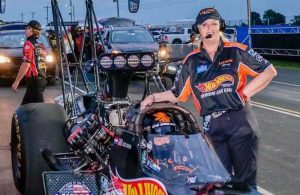 “I was doing everything I could to support our program in any way possible, Gerda explains. This certainly wasn’t the team role I planned to be in, not ever! I was actually terrified the first few times I had to squirt gasoline into the injectors but with some great support I’ve overcome that hurdle and am now adapting to my co-crew chief responsibilities. I also feel very blessed to have had teachers like Eric Lane, Lance Larsen and Rob Flynn, and of course my biggest mentor Lex.”

Joe Castello: You and Lex are working together to tune the car; that’s kind of cool. A couple years ago you were just helping out and now you’ve taken over some of the tuning roles. What’s that been like?

Gerda Joon: Stressful, but also very educated, and I think he is doing a great job because most of the calls come from him. I just am the person who puts in the numbers but it is very cool because I think we are the only husband and wife team out here that are running their own cars on a flustering budget instead of a shoestring budget. We work our butts off during the week, we put every penny we have in it, and we just pray to God, see how it goes and give it everything we have.

“It’s great to have the support of the NHRA, our sponsors and our amazing fans. As a woman, I hope that I can inspire others to step outside their comfort zones and pursue roles that will offer them personal and professional pride. I am still learning but the experience is beyond what I ever imagined possible. Being supportive is one thing, stepping up when needed into a role that is as critical as a co-crew chief, well…it’s just been crazy!”

While funding has continued to be a challenge, Lex and Gerda have budgeted to attend as many races as possible. 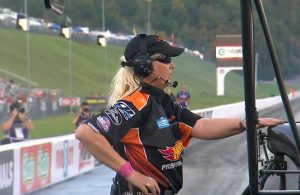 “We don’t have a trailer full of motors to just throw in there so we need to be smart about our decisions, smart about when we do and don’t opt to make a run. One thing you should know by now is that we never quit, and we won’t ever quit! My plan is to keep moving forward, to learn more, to listen to others who know more, and to get our car into the winner’s circle. We know it will happen, we just have to take lots of steps to get there as a team! Remember “The Tortoise and the Hare fable…we are the tortoise and at the end of the day we will succeed!”

“I know I am in a male dominated role, but I plan to make a positive impact for our team and this sport. Whatever they say about negativity, I hope to turn that impression around…at least so far as being a female co-crew chief is concerned. This sport is all about family and this is an example of how we show our support for one another.”

Lex Joon Racing looks forward to working with returning marketing partners as well as adding new partners for the 2022 NHRA Camping World Series Drag Racing Series. As announced, they have entered the NHRA Gatornationals in Gainesville, FL March 10-13. Additional entries will be announced in the future. #NEVERQUIT 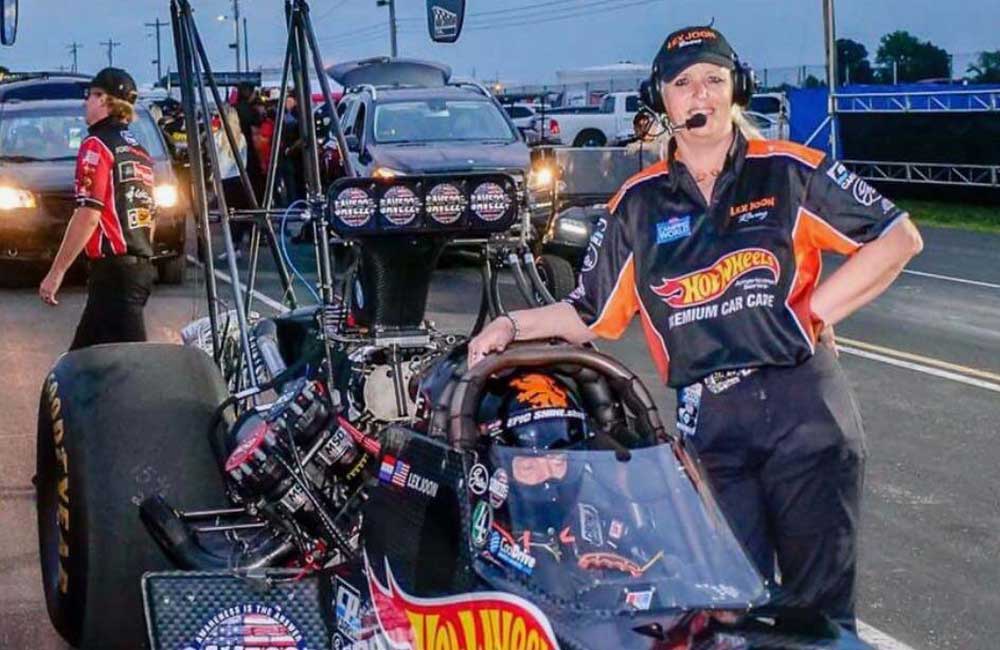