NHRA teams, and even the series, among those using social media to bring in the bucks.

Not everyone can acquire a sponsor the way NHRA Pro Stock owner-driver Alan Prusiensky did last season.

While Prusiensky was engine testing his race car on the dynamometer at his Rockaway, N.J., shop, a fuel line came loose and sprayed fuel all over the dyno booth. He emptied two full-sized extinguishers that contained Cold Fire/FireFreeze, an environmentally friendly fire-suppressing agent.

When he went to the Cold Fire/Firefreeze office nearby to have both canisters filled, the woman who owned the business asked what caused a fire so drastic that he needed two cannisters to douse. Prusiensky told her. She took an interest in his racing. It turned out her company had had a sticker on John Force’s Funny Car years ago

Later, Prusinensky and wife Christine approached the woman about a possible marketing partnership, and they struck a deal that lasted for a handful of races.

Prusiensky wouldn’t endorse this method of doing business. But another non-traditional way of securing sponsorship has emerged and proven to be powerful: social media. The nearly immeasurable impact of social media has been well-documented and well-accepted. However, its use today for race-team marketing is just the tip of the iceberg.

The most visible example is Marcus Lemonis—chairman and CEO of Camping World, Good Sam Enterprises, and Gander Outdoors and highly successful businessman in a variety of ventures—with his bold use of Twitter. Immediately after the NHRA announced its lawsuit with departing series sponsor Coca-Cola in September, Lemonis gave the sanctioning body a lucky break and fans a huge surprise by taking his high-finance series-sponsorship inquiry to the streets.

A longtime drag-racing observer contacted an NHRA official and told him “Stop your Twitter romance and give the man a call.”

Lemonis said he didn’t want that: “No, I wasn’t going to let ’em do it. I wasn’t going to let ’em do it, because, you see, I wanted to see pressure on them. They were very public about what happened with Coke, and I really wanted to understand why, because there are usually reasons a sponsor leaves. It isn’t just because they aren’t selling enough soda. They’re unhappy with something. They’re not feeling like they’re getting a return. There’s always more to the story. I thought I would ferret it all out in public, that maybe people both pro and con to NHRA would surface. And there was a number of people who reached out to me and said, ‘This is a bad idea’ or ‘This is a good idea.’ And I really appreciated the feedback.”

Funny Car 2016 champion Ron Capps marveled at how the relationship unfolded on the social medium. He said, “How they put it together, someday looking back, it’ll be a good story, the fact that Marcus got on Twitter and started ‘flirting’ with a few of us drivers. Then the NHRA got involved, and it sort of went back and forth to the point that I questioned if it was really Marcus or if somebody hacked his account.

Pikarsky said, “I commend Marcus Lemonis. I respected him before as an entrepreneur and a professional businessman. He’s successful. He stepped up. He saw the connection and the opportunity and didn’t think twice about it.”

It was the same for him when he aligned himself with Top Fuel racer Lex Joon, the Dutch FIA (European) champion who has experience, Pikarsky said, with “distribution of automotive chemicals globally. He knows it’s about more than going A to B on the track. It’s about going A to B from our warehouse to customers’ cars. He understands my business.”

Likewise, Pikarsky recognizes the NHRA’s appeal for Camping World. Earlier in his career, Pikarsky was vice president at Pro Stock’s Cagnazzi Racing. The team’s sponsor was Slammers Milk, and he recalled the days when he, the product reps, and racers would visit the campgrounds that sprang to life at or near racetracks with RVers on event weekends. Twice a day they would bring on their golf carts coolers stocked with the various flavors of the milk and hand out samples to race fans, “because the fans were in the campgrounds, hanging out.”

Pikarsky agreed that the landscape has changed drastically for the business of motorsports marketing.

“When I was in sponsorship procurement and senior executive business development for the motorsports teams I worked for, we didn’t have social media. We had the Internet and email and a phone. It wasn’t too long ago,” Pikarsky said. “Since I’m on the other side of the marketing and sponsorship partner programs, being an entrepreneur and a business owner, we see great value in the social media advertising promotions, emails, product features, ad specials, brand awareness, new products, new retailers events, [and] car shows. So having social media these days as a tool to reach out to potential marketing partners . . . we believe in this.

“I do not take it lightly and try to go back to everyone who reaches out to us – and there’s a lot of people reaching out to us. Back when I was in the business, it was dialing the phones and sending emails and a lot of follow-up cold calls.”

Pikarsky’s current involvement in the NHRA scene evolved from contact through the business networking site LinkedIn.

“When Lex Joon reached out to me on LinkedIn social media, I saw it as another team reaching out,” Pikarsky said. “However, when he followed up the response with a request to jump on a call, I like that approach: up front. Why are you reaching out to me? How can I help you? What are you trying to sell me? Just open the door and pitch me. It’s OK in this world today.

“Everyone’s busy. Everybody has calls they have to make and responses to the calls. So if you’re going to knock on the door. you might as well tell me what you have in mind and what you’d like to pitch me. That’s exactly what Lex did. He respected the fact that everybody’s busy. He also respected the fact that I was able to jump on a call with him right then and there. We had a good conversation for about a half hour. Once he found out I was a drag racer, he felt the deal is pretty much done, but it was a matter of getting together and creating a B2B opportunity. Lex was spot-on. He was looking to see some momentum.

Joon used LinkedIn strategically. He said, “It starts with a common interest, and there we go! For me, it’s not a new way, although it’s for sure different than it was, say, 10 years ago. It’s a lot of work, and 60 percent (of your target audience) doesn’t react at all. But you know what? You only need one to make it all happen. The cool thing with LinkedIn is that it’s more or less more (for) business.”

Oh, and Ron Capps, it’s actually a good story right now—expect more and more race teams and maybe even other sanctioning bodies to follow Lemonis and Joon in reaching out to grow their businesses. 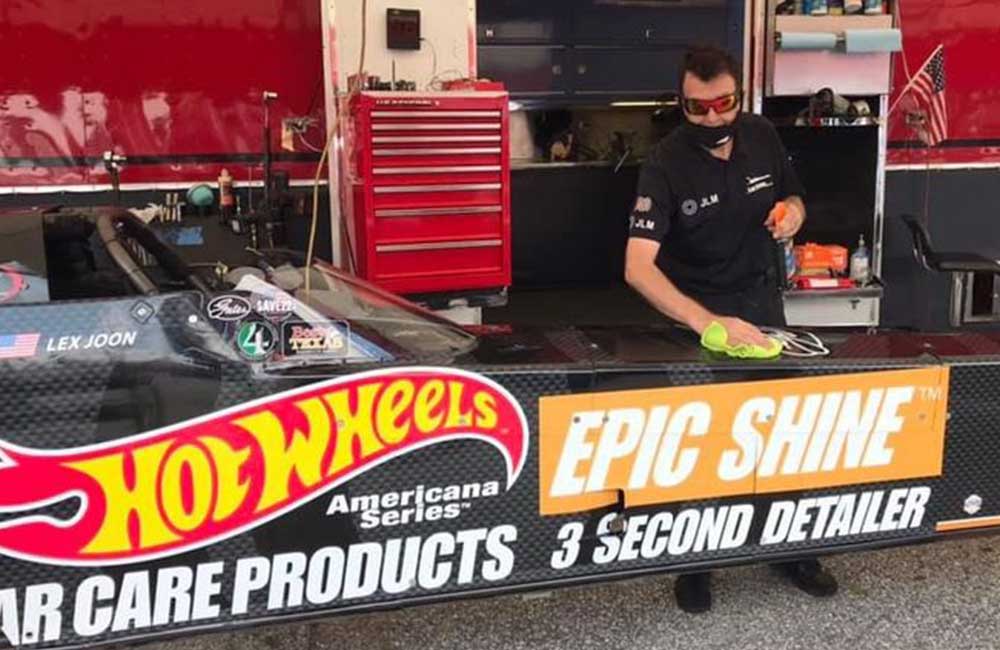 NHRA Top Fuel owner-driver Lex Joon applies his sponsor’s product to his dragster, but only after applying a successful strategy through LinkedIn to his marketing program. COURTESY OF LEX JOON RACING VIA FACEBOOK