June 17, 2019 – Competition Plus/Susan Wade – ​Gerda Joon has a favorite photo. It was taken from Joliet, Ill.’s Route 66 Raceway tower, a tight shot looking down onto the dragstrip. Husband Lex Joon was sitting in his Top Fuel car, and she was standing beside the cockpit. It was, indeed, just “him and me” when they decided to sell their belongings and leave The Netherlands, start their process to become American citizens, leave their comfort zone where he was known as an FIA/European Top Fuel champion, and start all over as an underfunded NHRA team.

It is, indeed, just “him and me” when they work in close quarters in their small trailer that’s half the size of the ones that house a veritable parts store and spare engines.

It was just “him and me” when the transmission on the race team tow vehicle went pffft and the air compressor went out on the truck, all in the same weekend at Topeka – where on-track they lost the motor, cylinder heads, and assorted parts they were trying to conserve.

For a few moments it was “just him and me” when Lex Joon recorded his first-round Top Fuel victory in the NHRA Thunder Valley Nationals – his first in American drag racing. He chattered on nervously about not seeing his win light and how good it felt to win in a wild ride against Leah Pritchett. At the starting line, Gerda Joon was overcome with joy but quickly morphed into a zealous cheerleader eager to send Lex and the JLM Lubricants Dragster into Round 2.

But the Joons were surprised to learn that in a sense, it isn’t “just him and me.” Their American Dream Tour has built a family of followers. True, the crowd wasn’t there when the Joons hurried home from Bristol to be back at Indianapolis without missing a day of work and to prepare for this weekend’s Norwalk race. “I need to work again. Same time we need to get the race program going, especially because it’s four in a row. There’s a lot of things going on. I had some cylinder heads that needed to be fixed. There’s nobody that has time, so I go to one place that can weld it, I go to another place that can cut it, I go to another place that can put the seat in to get it all back in time. I had to buy another motor because the other motor we damaged didn’t get back in time. So I had to find another motor, by another motor, buy another crank. If you want to be successful you need to be prepared, and if that means you have to work 24/7, then you do it,” Lex Joon said. “It’s a path you have to walk through, and I don’t mind doing it. At the end of the day I believe we will be successful, because we have the determination to do it.”

He said, “Gerda and I came here to do this. So it’s easy to say, ‘You know what, it’s a lot of work and it’s probably not going to happen.’ We invest a lot of money in this, money we had to borrow. It needs to come back, it needs to be paid for. If I sell this, I will get my money back. But we are here for racing. We are here to build a future not only for ourselves but also for other people – living the American Dream, right?’”

And that’s what people see in the Joons. That’s why the fans embrace them and love seeing Lex Joon’s “Never Quit” slogan on the wing of his dragster and in his pit.

“I see more and more people that are just here for me,” Joon said. “I talk to people and they show me [items] with ‘Never Quit’ on it. I said, ‘What’s going on here?’ One fans told Joon, ‘You inspired me. I had cancer. I didn’t know what to do. I saw you and what you were going through, and I made it.’ So I see that we have more in this than trying to be a race team.”

Joon said he never anticipated that: “No, I never. I put “Never Quit” on the rear wing, to be honest, for myself. When I walk by the car I think, ‘You know what? You promised yourself, ‘Never quit.’ A lot of people stop here and take pictures under the wing and start talking about it. That’s a part that I didn’t really see coming. There are certain ways to do this, but I think it’s really cool that we touch a lot of people and we can be an example. A lot of young kids show up right now with their families to talk to me, take a picture.”

He could skip qualifying rounds regularly to save parts, but Joon said at Bristol, “I need to be out there today to show people no, I’m just not out here to collect the qualifying money. I’m here for you and because of you, and at the same time I can keep working on my tune-up and hopefully next week be able to qualify in a bigger field – because 16 cars you’ll be qualified anyway, but that’s not me. In Chicago there were 21 cars. The only good thing is with 16 cars is you know you have some qualifying room. But to be honest with what happened last week, we damaged the motor. To fix that by itself is already $7,000 to $8,000. You got $10,000. I can tell you my hotel bill is over $2,000. Then you need to buy the fuel not only for the tow car but also the race car. A barrel of fuel is $1600. So the $10,000 seems to be a lot of money but it’s not enough. But if you want to go somewhere you have to go through the motions to get there. There’s no way around it.

Through it all, Joon doesn’t think of his American Dream as a nightmare.

“Well, yeah, it can be, but this is a great country. There are a lot of great people around here, a lot of people that get it, that understand it, and we can be an example for,” he said. “When they asked me back in the day when I applied for my green card, ‘Why do you want to go to America?’ I said, ‘To get my experience over there, to help serve the people, make the country better, as far as possible.’ We got the green card, and that’s an achievement by itself. I know Johnny Lindberg is still trying to get one. It’s not easy, but at the same time this is an agreement that we had to go through some nightmares but at the end of the day it’s really cool.

“For me the glass is always half full. Like this weekend, we came here [to Bristol] and we didn’t have any problems. Everything went fine, that’s cool. Last weekend we lost a transmission, we lost the starter motor, we lost a motor, we lost a lot of things. So you can appreciate when things go right. At the end of the day, that’s the plan,” Joon said.

Just being part of the NHRA scene at Bristol was a bucket-list item for Joon.

“This is the first time I’m here,” Lex Joon said last weekend. “I’ve never been here before, and I always watched it on television and I always thought, ‘That’s a really cool place to be.’ So now we start racing this year, I put this race on the calendar, and I said, “No matter what happens I need to go to Bristol. I need to be there. I need to see this. I need to live this.’

“Look around you, all those mountains. When I see the grandstands in those mountains, when I walked up, I thought, “This is what I recognize from television.’ This is really cool. I love it here. It’s a great place. Great people,” he said. “That’s another thing, where we go in the country, people are different. They’re all cool and all nice, but they have a different approach to you. That’s something else that I really like. But Bristol I really like. I love it. The track is great. I like the weather. I like the mountains.”

He said what he saw at Bristol “is they are working class. They see what we are going through. It’s the connection between them and us. It’s like they’re a part of my time. I don’t know how to explain this. It’s a connection.”

Someone chimed in that the folks in East Tennessee are “really giving,” and Joon said, “Maybe that’s why I feel the connection, because we do the same. But yeah, they are. We went to Topeka and we met a lot of great people there. But what I think is really special, and it’s more for me, is that the people know about our story. They come here and they’ve seen us on television, or they read about us, or they’ve seen us on the Internet. We’ve got a really big fan following, and here it’s the same – only what you see here is they really know a lot about you. They invested a lot of time to know about you. That’s really cool.”

That’s what keeps Lex and Gerda Joon moving forward. For them, competing at four races in consecutive weeks is a major feat.

“That’s almost the same as a complete FIA Championship,” Gerda Joon said. “There were normally six or seven. Now, this [the Thunder Valley Nationals at Bristol] is our sixth race of the season, which would be the same as a full season in Europe. The season over there is from May to September, so it’s more spread out. It’s affordable, and you have more time to fix parts because you are home for two to three weeks and you can work on your program.”

As the Joons work on their drag-racing program, their “Never Quit” work ethic has attracted a small army of followers. And maybe one day, Gerda Joon will add another favorite picture to her gallery. It will show her and Lex celebrating in the winners circle with more fans than they could squeeze into the frame. 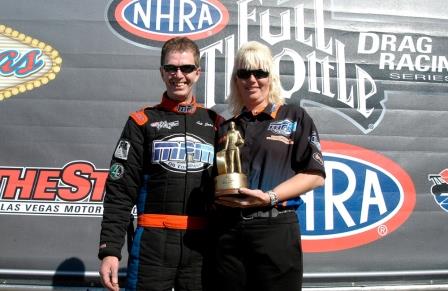