NHRA and Bristol Dragway have announced the addition of the NHRA Thunder Valley Nationals to the 2021 NHRA Camping World Drag Racing Series season. The fan-favorite event will be held Oct.15-17.

NHRA and Bristol Dragway have announced the addition of the NHRA Thunder Valley Nationals to the 2021 NHRA Camping World Drag Racing Series season.

The fan-favorite event will be held October 15-17, during the heat of the NHRA Countdown to the Championship playoffs. Drivers in all four NHRA Camping World Drag Racing Series Professional categories will continue their battle toward a world championship in the valley of Bristol Dragway. The seven-race Countdown kicks off at Maple Grove Raceway and will conclude at the Auto Club NHRA Finals in Pomona.

“We couldn’t be happier to bring Bristol back on board for the 2021 season,” said Glen Cromwell, NHRA president. “The NHRA Thunder Valley Nationals is a staple on the NHRA circuit. The fall date will give us the opportunity to allow more loyal NHRA fans into the facility. To have the event as a Countdown race is an added bonus for both NHRA fans and competitors.”

“We can’t wait to hear the roar of nitro-powered engines rumbling once again at historic Bristol Dragway as we welcome fans back to an NHRA Camping World Drag Racing Series event and celebrate our 20th anniversary of NHRA racing at Thunder Valley,” said Jerry Caldwell, executive vice president and general manager at Bristol Dragway. “We anticipate a lot of championship drama in the top classes taking place during the NHRA Thunder Valley Nationals as one of the final three races on the 2021 schedule.”

In addition, NHRA and Virginia Motorsports Park have announced the postponement of the Virginia NHRA Nationals due to COVID-19 restrictions in the state of Virginia. NHRA and track staff will continue to work together with state health officials to determine a new date.

After the success of the season opener in Gainesville and two strong events in Las Vegas and Atlanta, NHRA looks forward to the NGK NTK NHRA Four-Wide Nationals at zMAX Dragway and the Mopar Express Lane NHRA SpringNationals Presented By Pennzoil at Houston Raceway Park in the next two weeks as well as the NHRA New England Nationals and the Summit Racing Equipment NHRA Nationals in June. 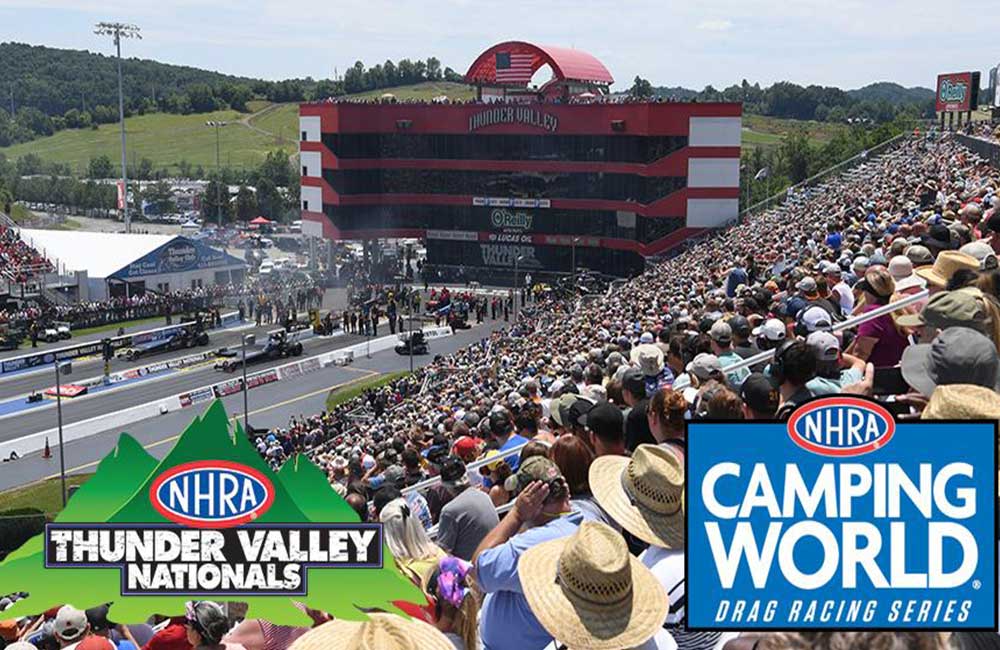